Happy post-Australia Day to you all! 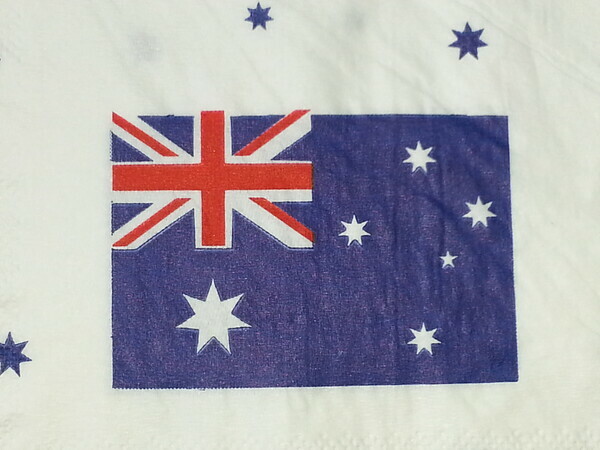 It's been great to be down under in the sunshine..well, and the warm rain! After spending July 1, 2014 in Ottawa for Canada Day, I've been enjoying the comparison with celebrating Australia Day in Australia. There's a lovely warmth, casual pride, and sense of fun with the Australians on the national day--first time since childhood that I've been in a 3-legged race as well as a egg and spoon race. And played badminton--all this after having a few glasses of nice bubbly with a snag (sausage) bbq accompanied by the most beautiful table full of various salads you've ever seen. I was very happy to note my 7th anniversary as an Australian citizen and consider myself privileged to be part of the two best countries on the planet.

But, on to the art! As I left off last year, I was working on a bit of a carousel/merry-go-round theme, as a metaphor for life. A friend reminded me of the Joni Mitchell song, "The Circle Game" and I thought I'd put in a few of the lyrics to help your memories, or in the case of younger readers, to let them know of this famous song of the 60s.

"And the seasons they go round and round

And the painted ponies go up and down

We're captives on the carousel of time.

We can't return we can only look

Behind from where we came 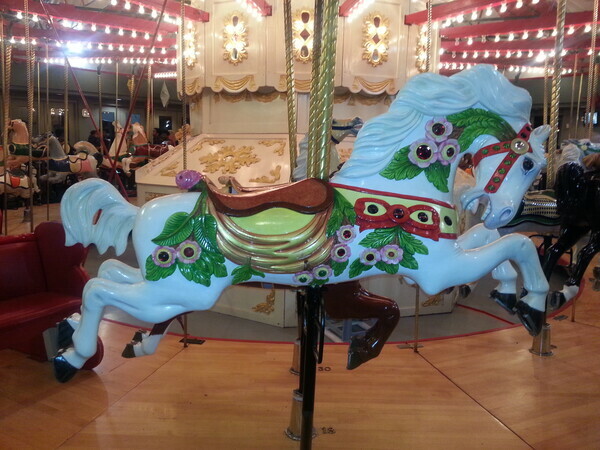 On my 1500 km drive from Melbourne (where I landed January 3) to Bellingen's Camp Creative where I was registered for my 4th printmaking session with Seraphina Martin, a brilliant teacher and artist in her own right, I stopped at two old carousels--one in Canberra and the other at The Entrance in New South Wales, to get some reference material and ideas about what kind of images to use in printmaking.

And this is one of the prints made from a little dry-point etching of this beautiful white prancer, from a restored carousel at the Burnaby Heritage Village Carousel. I have a few others but thought this would show off the simplicity of the design, with a minimum of colour (just the burgundy ink) as a more traditional style of printmaking. 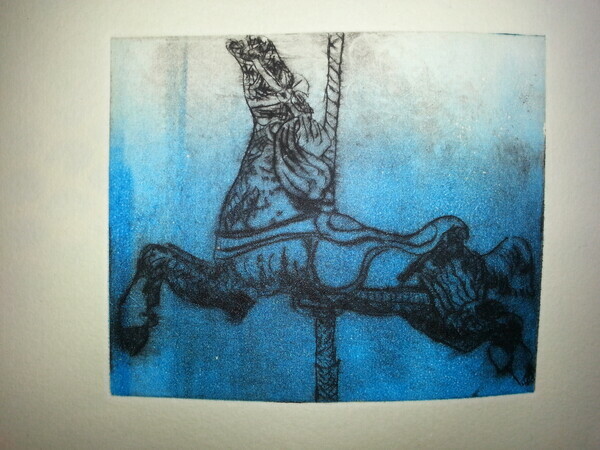 This is another of the Burnaby Village Museum's carousel horses, an excited American-flag carrying Apaloosa horse that's definitely up to something!

A slightly more complex treatment of the etching, using a colour relief (blue) roll over the black etching ink.

And here is the same plate with a technique using a stencil and two viscosities of ink--a very exciting method that I hope to explore more when I get back to Canada. 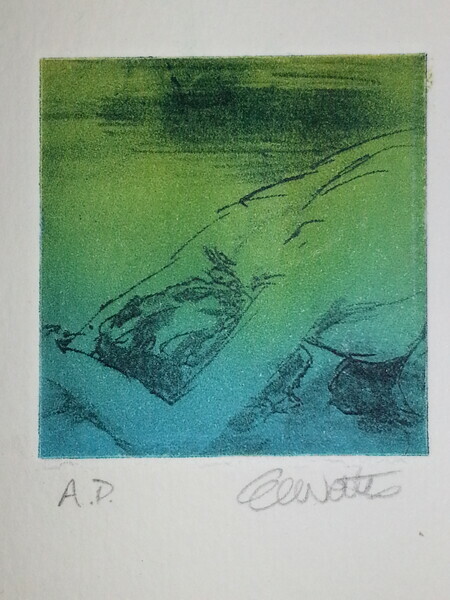 Not forgetting my life drawing, I did this tiny solar plate from an ink sketch I made over a year ago. There are a few more carousel themed plates, but I'll save them for a future post, or you can look at some on my Elaine Watts, Trout Creek Studio facebook page.

After a very intensely creative week, it was time to relax and enjoy some summertime in the Coffs Harbour area. 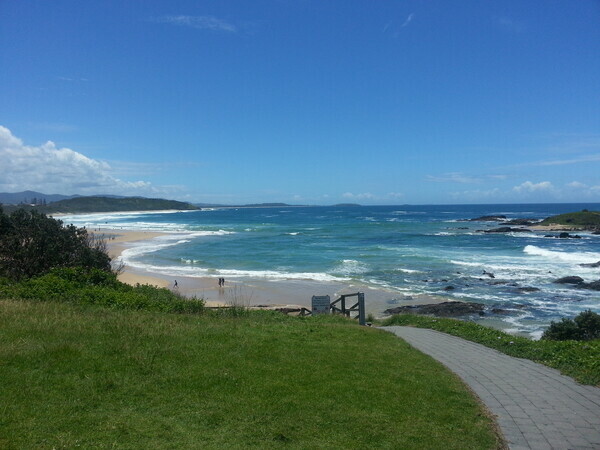 This was a lovely swim spot at a beautiful village called Sawtell--and I took full advantage of it! I also found a gorgeous rock pool about 500 m to the left and filed it away in my plans for future visits.

Another day a friend and I drove 90 minutes south to another village called South West Rocks, which has an old ruined gaol (jail if you're North American) as well as a great beach (yes, another swim was called for!) and a little further south to a beautiful lighthouse at Smoky Cape.

You all know the fascination I have with lighthouses and this one is a beauty. Just as I finally and sweatily reached the landing (it was a long steep climb up to the base) a storm cloud came over and I caught a few dramatic photos.

Perhaps some will end up as a painting sometime soon--so I will tease you with the thought.

Time to go now, until next time, enjoy the shortest month of the year!