Practising the Art of Printmaking in Australia

G'day from Urunga, NSW on the east coast of Australia, about half way between Sydney and Brisbane!

It's been a great start to the new year, an uneventful (if long) flight from Canada and a good time in Melbourne catching up with family and getting my little old Mazda geared up for the annual walkabout down under. I sped through Sydney (taking a rain cheque for a later longer visit) and headed to my 3rd session of non-toxic printmaking with Seraphina Martin at Camp Creative in Bellingen.

As excellent teachers do, Seraphina adapted her course outline to accommodate the three of us who were studying with her for the 3rd year, two experienced Australian printmakers and the bulk of the class who were novices! It was the best class ever and the results were astounding! 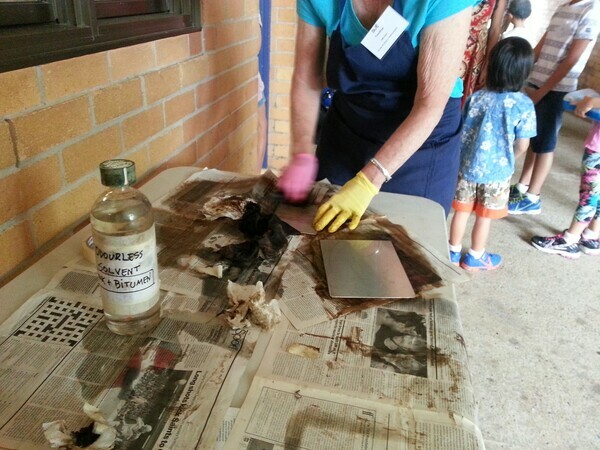 We started with two days of Aluminium Etching, making two plates through an intensive process of putting line, texture and tone onto the plates to make a more complex print. 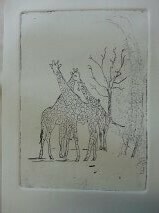 Here's the first (test) print from my giraffe plate--this one has only line and texture (the trees on the right) etched into the plate. 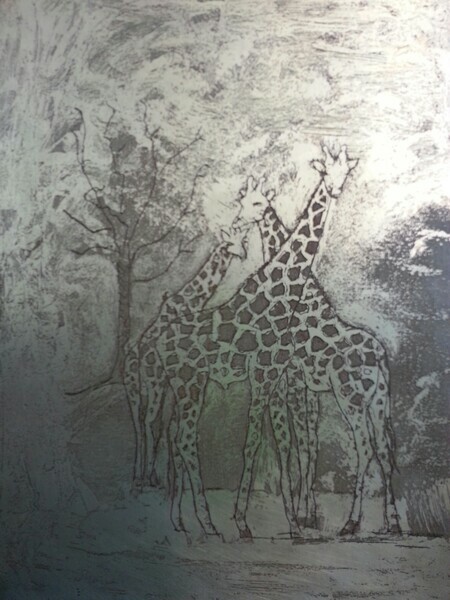 Here is the plate (note it is in reverse of the print--actually the print is the reverse of the plate, technically speaking!) after its final etchings for more tone (the darker areas in the sky and to the right of the giraffes, as well as the grass below).

I'm looking forward to testing this process with some other interested artists once I get home to Canada, as well as some of the other printmaking processes I know.

Next came the so familiar and exciting solar etching process, which will be easy to translate to the northern hemisphere (as long as we have enough UV light for the solar exposure part, that is!). We broadened our repertoire of inking and printing processes as well, adding found objects, colour rolls, and "a la poupee" to our printmaking skills.

Here's a great print from the giraffe plate, using a stencil (cutout) of a giraffe, as well as a leaf skeleton (found object) inked up as well.

You can see some examples of solar plate etching in my galleries and here is one I'm particularly fond of: 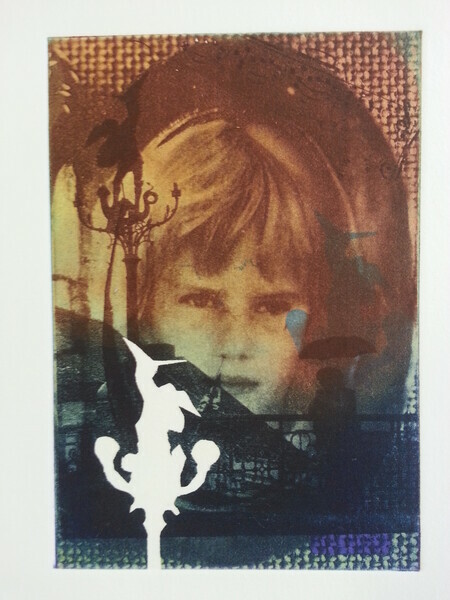 This is taken from an old locket photo of my late sister Shelley, with some other images collaged along with it and a stencil of the lamp-post superimposed on top. I have an idea in my head about getting a collection of works together for a future show revolving around her--stay tuned for that idea to come into fruition, probably in 2015.

Well, I must go, the 28 degree sunshine is calling me outside and I will keep you posted on my travels and art adventures as the walkabout goes by! Hope you are enjoying yourself as much as I am!