The End of the Roadtrip

When I left off we were just about finished our Newfoundland trip--one of the favourite spots! Music festivals, friendly folks, whales, beautiful coves, the character of St. Johns's--and great weather. After the long ferry ride back (17 hours) to Nova Scotia we sought out more music in Cape Breton (Ceiladhs, the Red Shoe pub), and amazing Louisbourg--another of the great National Parks. Could have done a whole other day there, and I think there's some paintings to be done of that great restored French walled village. 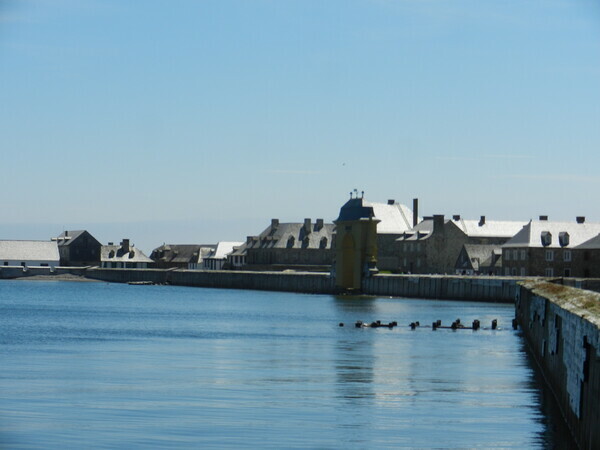 Then over to Prince Edward Island--the smallest and cutest province--only 132,000 people but I swear half of them could sing, dance and play some instrument--piano, guitar and fiddle being my favourites. We were at Charlottetown for the 150th anniversary of the meeting that set up Canada, as well as our 10th wedding anniversary. Lobster dinner, a great Tyne Valley music festival with my favourite band Blue Rodeo--although personally I thought Jimmy Rankin stole the show when he played with lots of passion earlier. So I bought all his CD's (just because I could!) 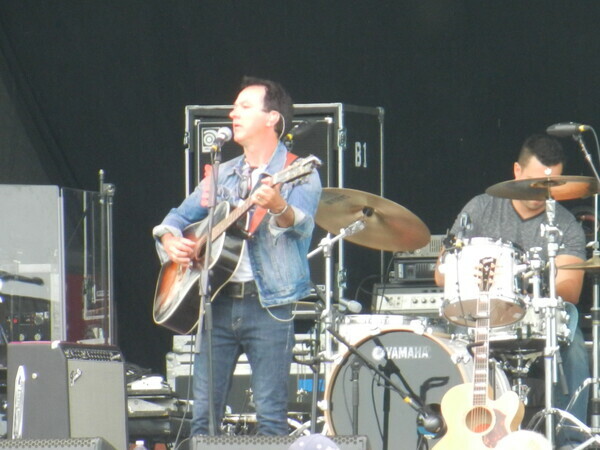 And there was the typical red soil and sand of PEI's famous Cavendish Beach, a few lovely galleries, and more seafood and touring before we drove off on Confederation bridge to New Brunswick. 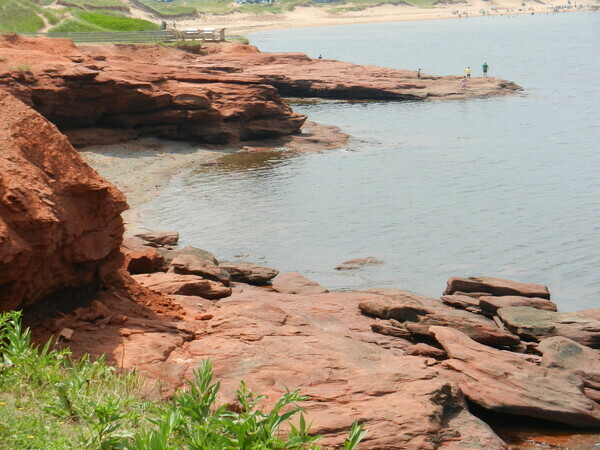 Very lovely and the Islanders are very passionate about their little province!

Next it was the north coast of New Brunswick (yet another Acadian enclave, lots of French spoken), great music, and past Shediac, the world's lobster capital (okay, let's get some more!) we stopped along the way near the dunes of Bouctouche. A lovely coastline, sandy shores all along, warm water, very quiet. But I tell you what, I was wanting to get back into Quebec territory--for the bread, the cheese, the language--and some adventures on the Gaspe Peninsula. Some people have never heard of it but I had an itch to see Rocher Perce--and the tip of the Gaspe (another National Park). First though a stop at another World Heritage site--an important fossil bed where they found fossils of fish that provided the link between swimming fish and fish developing legs (or limbs of a sort). You have to have some good learning to balance all the fun sights, and the eating!!

We pulled up to Perce in a storm so could hardly see the famous rock the first day, but the next day it cleared and we spent 2 glorious days looking at the amazing rock from many angles, near and far, and waiting for low tide so we could walk out the spit and stand underneath the towering cliffs with birds swooping and soaring 300 feet above, around their nesting spots. 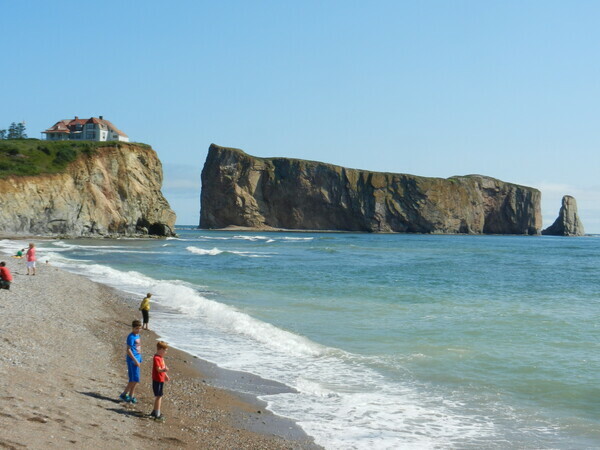 awesome about it from every angle. One day we took the traversier (ferry) across to Ile Bonaventure, as recommended by some fellow travellers. It was an amazing experience to see the nesting colony of 160,000 gannets--but you only want to do that once in your life! We had admired these graceful big albatross-like 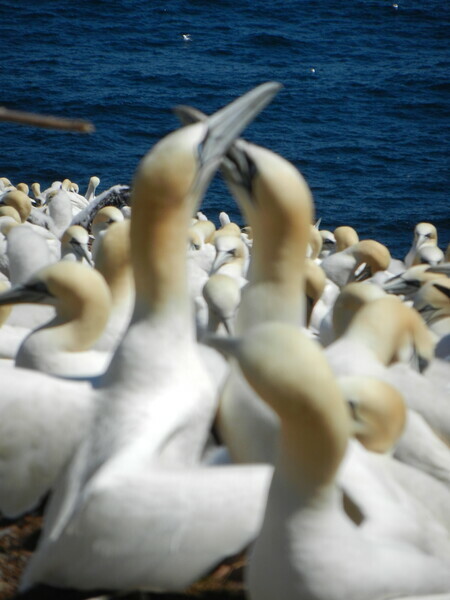 birds from the sea--swooping, then stopping in mid-flight to plunge deep into the water for fish. Then they popped up like a cork, with a fish in their mouths, and took off...well, some of them took off. Some of them were too fat to lift off the water! Not sure how their babies got fed back on shore. Maybe that's part of the reason there were a lot of dead chicks (it seemed to me) in the colony.

There were so many birds on the cliffs and the ledges of this island that the ground was white with them, from sea and from land. The noise and the stench was unbelievable--I truly know what "cacaphony" means after that! And there were herds of people--families eating their picnic lunch (we had to move away to find a spot with a bit less smell, noise and fewer flies!) and researchers watching the ritualistic behaviours of the gannets as they greeted each other, and fed their young.

It was a lovely island to walk around, and a beautiful day with lots of favourite things--ocean, cliffs and dramatic scenery, interesting wildlife viewing, whales, boats and sunshine.

Could have spent more time there, Perce is and has always been an artist's haven with many famous artists spending time there. I can feel some prints of the rock wanting to be etched into a plate!

But we pushed on to the tip of the Gaspe--Forillon National Park, and did a hike out to the end of the peninsula before working our way back along towards the south shore of the Saint Laurence River and heading for Quebec City.

NOW you're taking civilization, after the wilds of the Gaspesie. 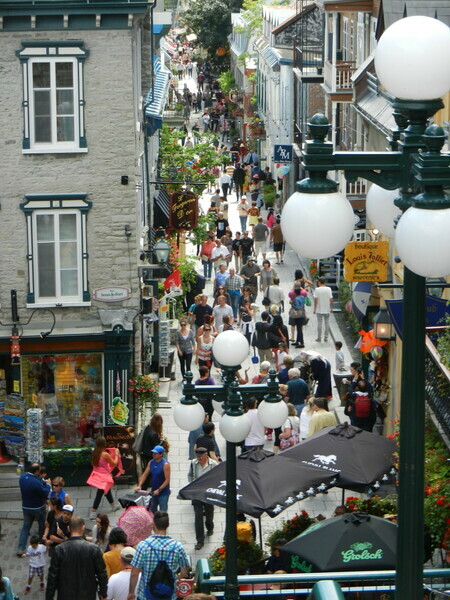 I hadn't been to Quebec City since I was a teenager, on a summer French exchange to Montreal. Even then it was only one beautiful day that I spent there--so this time I was determined to explore it much more thoroughly (and with a bit less partying!)

The old walled city is a UNESCO World Heritage site as it is the only remaining walled city in North America. Great National Parks interpretation of the walls, the archaeological diggings underneath Dufferin Terrasse, and the fortress of Quebec.

Lots of walking up and down ramparts, seeing how well-kept all the old buildings were, and enjoying all there is to enjoy. If you've never been here, put it on your bucket list--you won't regret it. And I'd go back again in a heartbeat!

The best croissants in Quebec (and we tried lots!) are found down one of the streets--Paillard's. Not cheap...but flaky & buttery & we took a few away for further snacking! 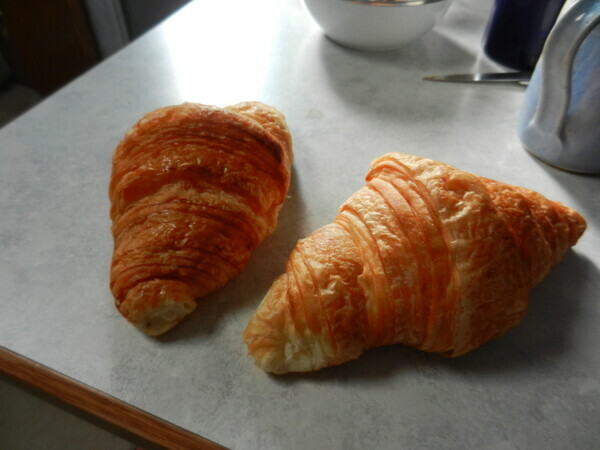 Oh they were yummy!!

Again regrettfully leaving a great spot, we headed north along the St Laurence, doing a quick circle tour of the Ile d'Orleans (picking fields of sweet strawberries in mid-August??) and stocking up on maple syrup and having a tour of a sugar shack. Quite a process from tapping the trees, running the tap lines through the forest, to boiling it down 100 times at very precise temperatures.

We headed on through the Charlevoix to our whale-watching destination at the mouth of the Saguenay. I have loved the beluga whales since seeing them at Vancouver Aquarium and this is one of the few places in the world to see them--from boat or near shore. And we saw lots! Sorry no pix, but we enjoyed their antics for 3 days--and one day we were lucky enough to see 4 kinds of whales (beluga, minke, fin and humpback) as well as so many dolphins on a lovely evening you couldn't count them. 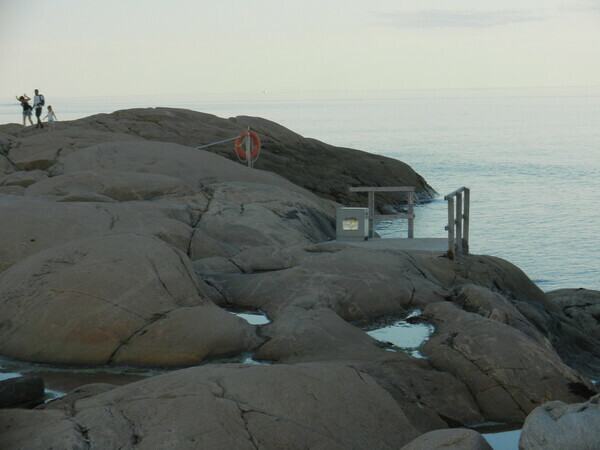 Another great spot (and National Park) on the north shore of the river, about 30 kilometres past Tadoussac. I was really hoping to see some blue whales, as this is one of the few places in the world you can see them from land, and they had spotted 6 of them the week before, but sadly might have to come back again!

So many places and photos, and we were only really starting to feel like we were heading for home. We drove straight west along the Saguenay, past Lac St. Jean (last stop for fromage et croissants!) and through "northern" Quebec (Chabougamou, Rouayn-Noranda, Val D'Or) and Ontario (Timmins, Wawa, Thunder Bay, Kenora) and back to Winnipeg. It took much longer to drive it than to write it all out for you to read! Just east of Winnipeg there is a sign posting the absolute centre of Canada and we were happy to be back in the West. We started to wander a little there, around the southern part of Saskatchewan we dropped down into Grassland National Park for a couple of days to see one of the newest national parks which is still under acquisition and development. Bison, endangered black-footed ferrets, burrowing owls, and black tailed prairie dog were highlights. Badlands and grasslands and very remote territory--we found it!

A few misadventures with the trailer had us leaving it in Medicine Hat for the Labour Day weekend and heading to Calgary & the Rockies. Oh we love our mountains--it was so great to see them come into view across the prairies! One diversion left--a stop at Dinosaur Provincial Park in Alberta--yet another World Heritage Site. 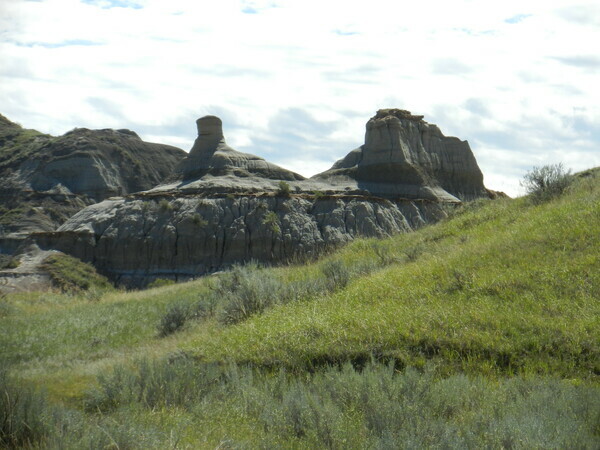 Again we were stunned by the beauty of this extensive valley dropping down from the plains. All the dinosaur bones and digging that had been done here--we only had a few hours and once again, another spot to come back to and explore further! 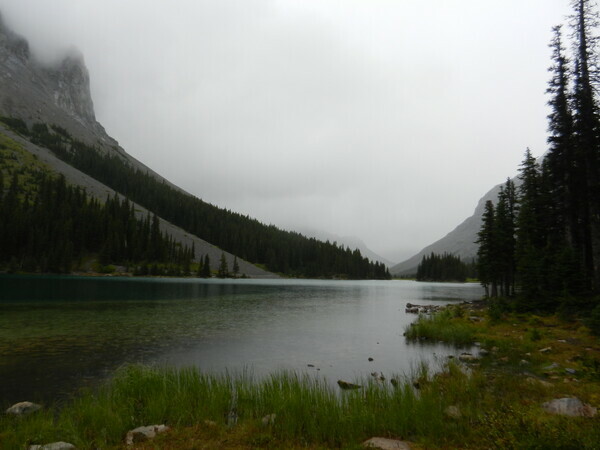 How many photos of the Rockies can you bear? This one (above) is in the Kananaskis area near the Rae Glacier, not even a great day (in fact there was snow further up...and then in the foothills at lower elevations as we found out the next day!) 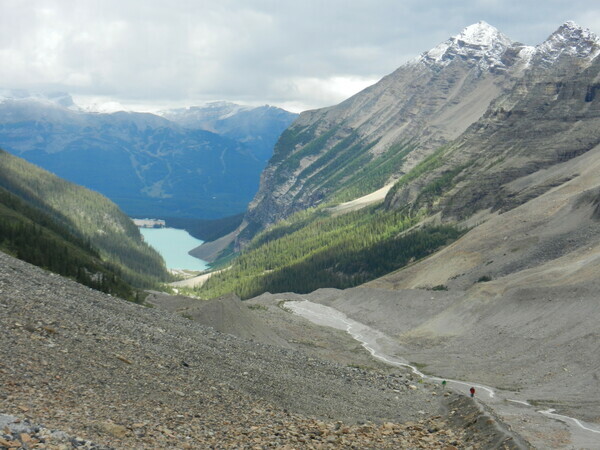 After retrieving the trailer we pushed on to our favourite Rocky spot--Lake Louise. You may not have seen this view of it before--from the Valley of the 7 Glaciers. Usually tourists are looking up the lake towards the great massif of Mount Victoria--well we were half way there (although not halfway up, vertically speaking, by a long stretch!)

We reluctantly got back on the last leg home after such a magnificent journey. How abruptly it came to an end--as everything does. It's a bit of a shock to have to re-organize many possessions and stay put in one place (well, actually we only had a few days before I had to head to Vancouver for the opening of the International Print Exhibition (BIMPE 8) that my work had been accepted into!) but we were happy to be in the beautiful Okanagan Valley again, to spread out into our home, to see many friends and family, and get prepared for the fall show season. And it's great for me, 2 1/2 weeks afterward, to put this blog together to remind me of what a fabulous time we had, what a great and beautiful country we live in, and how lucky we are. Thanks for allowing me to share it with you--I hope you're not bored already! Or possibly my next few blogs will be much less exciting! 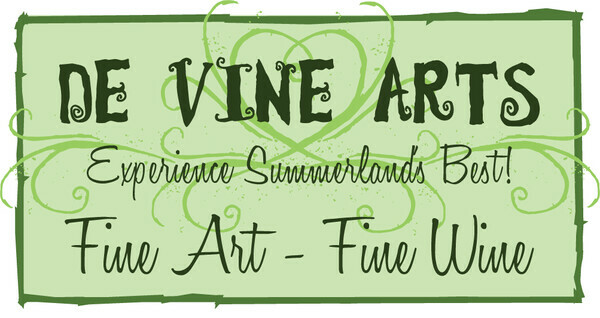 I am immediately headed into my studio to prepare!

The next scheduled show is "Make It!" Penticton, November 1 and 2 at the Convention Centre, followed by the Coquitlam Christmas Craft Sale in early December (my 6th year there!) Further details next time--meanwhile I have to get set to take some paintings up to the Good Omens Coffee House in Summerland--for the next 2 months. Great place in town, if you're around drop in!