What a beautiful country I live in!

I'm still on a Rocky Mountain high after two weeks in Calgary and Lake Louise! I was delivering a big commission to Calgary--a diptych of Winter Birch, 20" X 30" each panel. Here's one of the pieces:

This after a new client from the Carribean came into my studio and bought a smaller version--to take to the Virgin Islands! Guess they need some "cool" stuff there!

After I delivered the paintings, picked up another commission, and spent some quality time at the Calgary Stampede (the theme this year was "Come Hell or High Water") we headed for the Rockies and had four nights in last summer's home (the travel trailer) at the Lake Louise Hard-sided Campground. We hiked some spectacular places so I'll just put up a few of the shots I took. 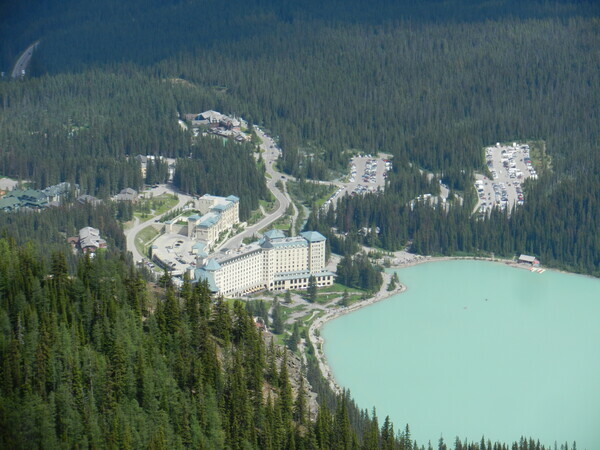 Chatea Lake Louise seen from above--at Lake Agnes. After that we summitted Mt. Saint Piran, almost 9000 ft. The legs were a bit sore the next day! 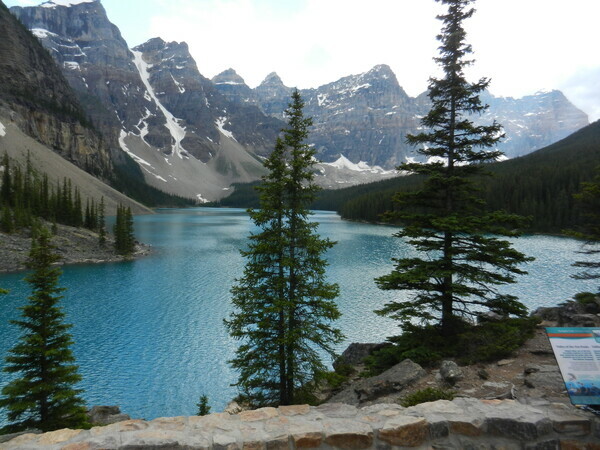 The next afternoon we walked the lakeshore trail and the "Rockpile" at gorgeous Moraine Lake, just southeast of Lake Louise. A view from about here used to be on a Canadian bill until all the new ones came out. Here on the Rockpile we came across two wedding ceremonies taking place. One of the marriage commissioners said he loves doing weddings here--one of the most beautiful spots in the world--and he had once married someone whose father was the printer who did the etching for the Canadian Mint, and another time married someone from the family of the artist who painted the painting the etching was made from! Even on a duller day you can see the beauty of this place--no wonder people from Japan come here to marry!

I think I feel some paintings coming on! We then summitted Mount Fairview, the highest peak we attempted at 9002 feet, and had another day on the Icefields Parkway trail of Helen Lake and almost over to the Dolomite Pass, where we were fortunate to see a grizzly sow with two older blond cubs--on the other side of the valley. (That's where the good fortune came in!)

And then for the piece de resistance--we got lucky and on our second day's attempt we made the standby bus into Lake O'Hara in Yoho National Park. We had the most glorious day in this secluded and restricted area just west of the Continental Divide--climbing up to the lookout (pictured at the bottom of the blog) over Lake O'Hara (blue) and Mary Lake (green), up to Opabin Lake, across a high and edgy trail called "Yukness Ledges" (for "ledges" read "clifftops") to Lake Oesa (I know, who made up these names?) before returning to the shuttle bus and back to the civilization of Lake Louise.

The weather through the whole trip was excellent--very cool nights (actually freezing one morning at Lake Louise) but great hiking weather and the only time we were really cold was at the top of Fairview, looking over at Lake Louise 4000 feet below, hoping to have lunch. The wind was blowing right off the glaciers and our hands were too numb so we headed part way down and perched with a view of Mount Temple (12,000 feet, just to put things in perspective!) while we ate.

Before I leave I'll just share some more news--I came home to a phone call from 8th Generation Winery (the closest one to my place) requesting my art in their tasting room for Summerland's Art Walk. Today I took in a selection of pieces which will hang there until August 31, and next week I'll deliver some paintings to the Summerland CIBC which was another place on the Art Walk that I have been paired with. So, if I'm away from my studio and you want to see some of my work, check those two places, plus the Summerland Art Gallery, and there's lots out there! And if you're in the Vancouver area, I'll be showing at Minnekhada Lodge in Port Coquitlam, Saturday and Sunday August 17 and 18. Come on out and see some art, take a hike, and see some black bears--if you dare!!