Where Was I, Again?

Many kilometres (currently at 18,000 and counting) and photos have passed since I blogged (why is this sounding like a confession? I must be influenced by all the churches I am seeing in Quebec!). I have so many stories and amazing places to share with you that I think this blog will have to be split. Many National Parks and World Heritage Sites were visited--all of them very special in their own unique way, and it made me appreciate Canada even more when we saw how much there is to know about our history and special places. Another confession: I haven't been journalling since late June, nor have I been producing any art--only taking photos for future work!

So, to continue where I left off last time, in Quebec and heading for the Maritimes. Starting with the Bay of Fundy and its amazing tides--and lobster! 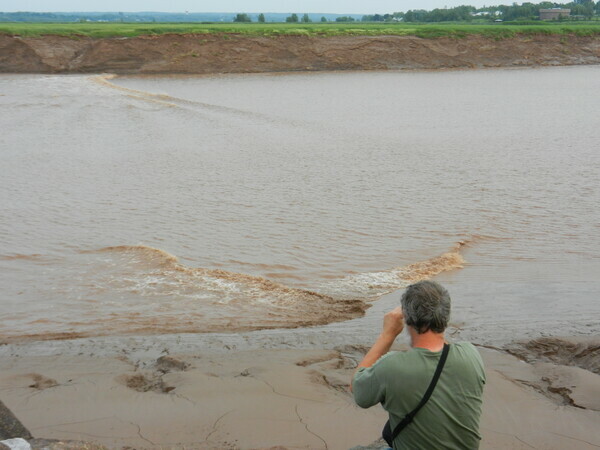 You may have already seen photos of the Flowerpots--I seem to have missed taking any! So here's a slightly less spectacular photo of the tidal bore at Moncton. We watched a couple of guys surfing on the crest of the tide as it pushed its way upriver. After a half-hour wait we could see why there weren't too many people watching--but it was fun to see how quickly the big tide filled up the channel.

Next on to Nova Scotia where we had our first introduction to the Acadien story--at many national sites including Fort Beausejour and Grande Pre (photo below). 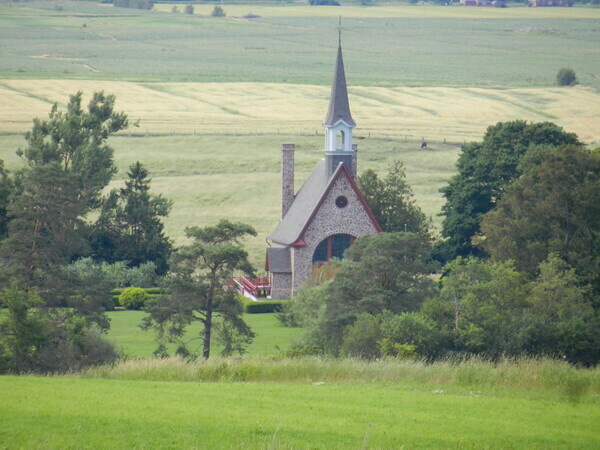 The Acadian story, I hadn't realized, is a little bit of Canadiana that spilled over into the US ("Cajuns" in Louisiana is an off-shoot of the story).

The Acadians were descendents of French settlers that had been in Canada, around the Maritimes in very many places, for over a century before the British won one (or more) of the many disputs and when the Acadiens wouldn't swear allegiance to the British king, they were deported--to many areas including France, the Southern US, and other countries (where of course they weren't greeted with open arms!) Decades later many were allowed to return and resume residency amongst the English settlers (again there would have been much tension!). Very interesting group of people whose language and culture including music has influenced many areas of New Brunswick, Nova Scotia, and Prince Edward Island.

Well, not much time for more as we were off to Halifax, enjoying the Citadel there, seeing the first of many cannon shots! 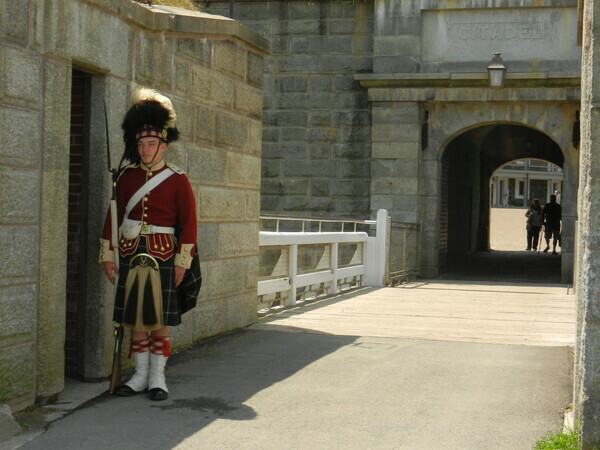 Other highlights of the area: Peggy's Cove and the Swissair crash site nearby--on a spectacular day. I can see why so many people want to paint there. 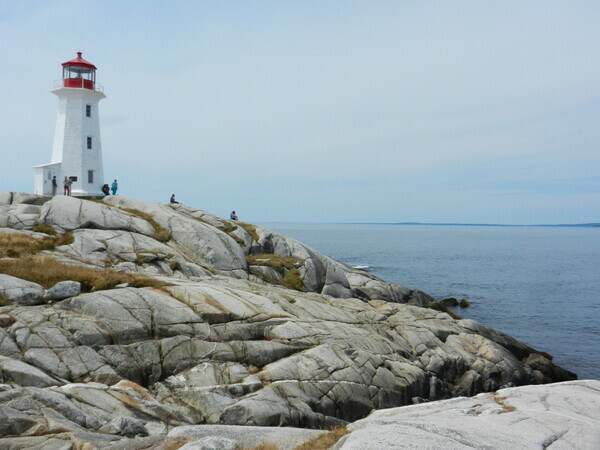 A mussel lunch was enjoyed sitting on the lovely granite slope, watching dolphins while everyone else was wandering around admiring the lighthouse.

I've kept my best photos of the area to myself, as reference material for future paintings. I saw a great lighthouse themed body of work in Newfoundland and it reminded me that I have that on my list too. We have seen some number of lighthouses and they never lose their appeal for me. I've done a few lighthouse paintings already (mostly sold) but have a few more in me, I think!

On to Cape Breton Island (also part of Nova Scotia, but a very distinct part) where we caught our first great music. Wanted to stop at the Red Shoe Pub (owned by a couple of the Rankin sisters, of Rankin Family music fame) but had to push on to Sydney to catch our ferry to Newfoundland--so we popped into a local hall in North Sydney to see some local music and found a Cape Breton Kareoke night--to our horror--until we saw that all these locals stood up to sing--very well indeed-- with a live and very great band! Even the 95 year old lady who had to be helped up on stage to sing was fantastic! 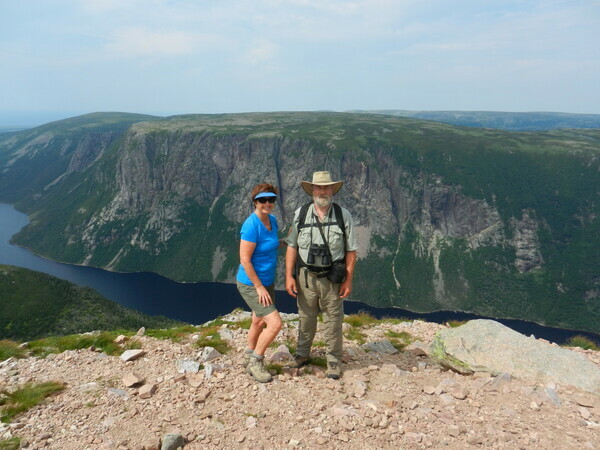 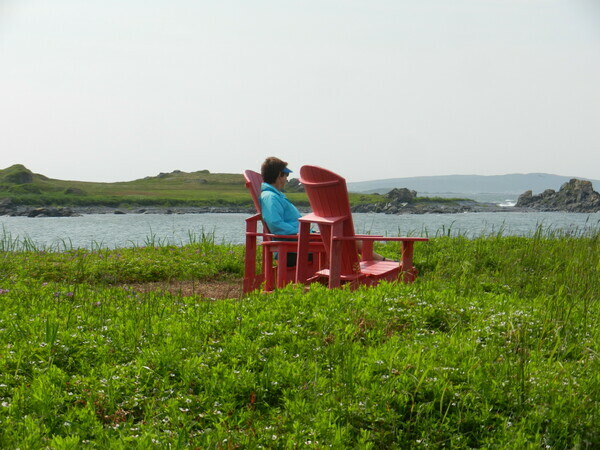 Parks Canada has these great red chairs set out in all their parks for you to enjoy! 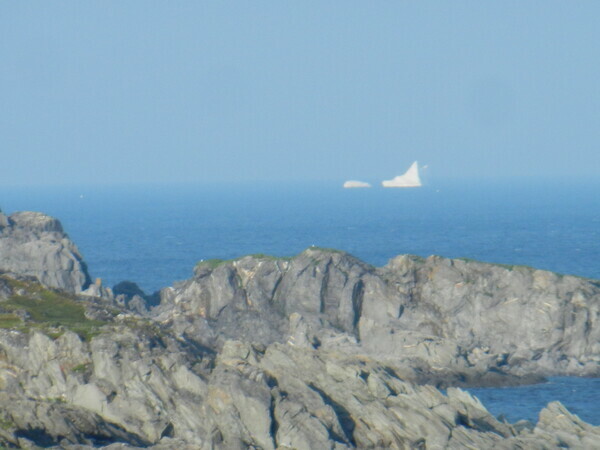 Seeing icebergs, and jumping whales playing, just about anywhere along the northern coastline!

Ok, that's about enough of the travelogue for now--and that's only taking you to St. John's, Canada's easternmost point. There's a great art gallery and museum there, "The Rooms" which I really enjoyed--especially the view of Signal Hill and the harbour but also the art including some printmaking. And of course more seafood, lobsters, cod, and whales and lighthouses at Cape Spear.

I sure hope I have lots of painting years left in me, as I have enough reference material from my travels to do for an extended period!

Now, I do want to extend you an invitation--during this summer I was delighted to get an email that some of my work has been accepted into a very important biennial international miniature print exhibition which opens in the Federation Gallery, Granville Island, on September 11, 6-9pm. Please come and enjoy the evening with me--the show will be there for about a month, then it moves to the Dunderave Printmaking Studio again in Vancouver for October, on to Edmonton and Kelowna (UBC Okanagan) in early 2015. Google BIMPE VIII for more details!

My next show will be in September, Devine Arts at Summerland Waterfront Resort, the weekend of September 27th, free entry and wine tasting along with fabulous artists. It will be great to be showing at home after all this time away! And I will be doing another local Penticton show November 1 and 2--but more about that later!

Hope you enjoyed this small portion of our big trip--and I will put some more photos up and continue the story in the next edition!